The Biden Administration has repealed the Trump era metric system for evaluating Immigration Judge’s performance, based on how many cases the judge adjudicated per year.  In that system, a completion of 700 cases per year would be deemed a “satisfactory” performance by the judge.  The new policy memorandum, released October 19, 2021, has already been disseminated to Immigration Judges for immediate implementation.

This author has gone to trial in hundreds of cases before an immigration judge and a properly heard case presented by the immigrant, including the immigrant’s and witness testimony, usually takes about a 4-10 hour hearing (continued over two dates).  Then, the judge must render a multiple page written decision, analyzing each element of the law and all the evidence submitted by the parties.  Counsel usually has to sit and listen to the immigration judge render his or her decision and it usually takes over an hour.   So, on average, each individual’s hearing should take at least 5 hours.  Trump era judges were rendering decisions within an hour, which necessarily included tactics such as usurping direct testimony from the immigrant and denying requests for witness testimony.  For obvious reasons, including due process principles, the Trump-era immigration policies drew immense criticism from immigration judges and advocates.  Immigration judges rightfully argued that the policy took away from their authority.

"The Agency is in the process of developing new performance measures, drawing from past successful measures and appropriate input, that will accurately reflect the workload of an immigration judge. These new performance measures will focus on balance and equity for the various types of docket assignments," the Tuesday memo reads. The president of the immigration judge union, Mimi Tsankov, stated in response that "Suspension of the metrics is an excellent first step…We now await the opportunity for management to recognize the National Association of Immigration Judges union and work with us to establish appropriate measures for the agency to assess its productivity and ensure due process for the parties before us and judges themselves."

Attorney Liliana Gallelli has been practicing law since 2004, focusing in immigration law and currently a partner at the law firm Kerosky & Gallelli. All aspects of immigration including deportation defense, asylum, family petitions, naturalization and business visas. Also elimination of criminal record. To contact Ms. Gallelli, please email liliana@legalkg.com. The content of this article is not intended to be legal advice.

HERE’S THE LATEST ON IMMIGRATION REFORM

The Congress of the U.S. is busily considering immigration reform legislation that would impact the lives of many undocumented immigrants.... 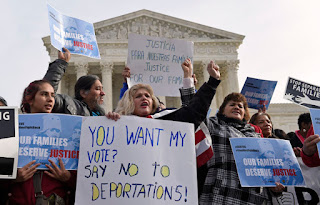