THE INVASION OF UKRAINE MAY JUSTIFY ASYLUM CLAIMS BY UKRAINIANS LIVING HERE IN U.S. 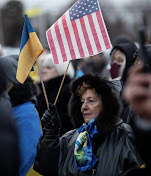 THE INVASION OF UKRAINE MAY JUSTIFY
ASYLUM CLAIMS BY UKRAINIANS LIVING HERE IN U.S.

By Christopher Kerosky and Liliana Gallelli

It is too early to tell what will be ultimate outcome of the Russian invasion of the Ukraine but it’s probably clear that the safety of activists for Ukrainian sovereignty and independence will be less certain in the Ukraine as a result of this action by the Putin-controlled regime.

For persons here from the Ukraine who support their country’s independence this may open the possibility of filing for asylum, if they can show they would now face persecution if returned there.

Asylum cases that were denied can be reopened by the filing of a motion to reopen with the immigration court or the Board of Immigration Appeal based upon “new circumstances”.  The invasion of the Ukraine may justify such a motion.

Even more so, visitors from the Ukraine who fear persecution from a future Russian-controlled or Russian-influenced government there may be eligible to file a claim here in the U.S. with the Asylum Office of the U.S. Department of Homeland Security.

This applies to Ukrainians living here many years who still lack legal status.

Procedure for Filing for Asylum in the U.S.

Here is a short summary of the procedure for seeking asylum for persons already living in the U.S.:

Like a refugee, an asylum applicant must prove that he or she has a “well-founded” fear of persecution based on the same grounds, that is: race; religion; membership in a social group; political opinion; or national origin.  In most cases, an individual must apply for asylum within one year of arriving in the U.S. but changed circumstances like the invasion can provide a grounds for filing late.

The process starts with an application sent to a CIS office which is the central receiving location for asylum applications.  If the applicant lives in Northern California, the file is then sent to the CIS asylum office at 75 Hawthorne St., San Francisco.  At some future point after applying, the applicant is given an interview.  The interviews are held at the Hawthorne St. office and typically last about one hour.  The CIS has a well-trained staff who only conduct asylum interviews.  The confidential interviews are conducted by one CIS officer, who then makes a recommendation to his superior to either approve or deny the application.  Usually, a decision is made on applications two weeks after the interview.

If the application is approved, the immigrant is entitled to stay in the U.S. and obtain similar “asylee” status for their spouse and minor children.  In one year, the successful applicant can apply for permanent residence.

If an asylum application is denied, the case is “referred” to Immigration Court.   That process can take from 2-5 years, depending upon the judge’s caseload and other factors.  There will be a final court hearing where the applicant will be allowed to present evidence and testimony again in support of their case.  The immigration judge usually makes a decision at the conclusion of the hearing.

If the judge denies the case, the applicant can appeal to the Board of Immigration Appeals, and then to the U.S. Court of Appeals for the Ninth Circuit.  These appeals are often denied, but the appeal process can take up to five years or even more.

During this process, the applicant is permitted to remain legally in the U.S. and their time waiting is not considered time “out of status” for purposes of the law penalizing persons out of status in the U.S.